Uncategorized Stuck on a Roller Coaster 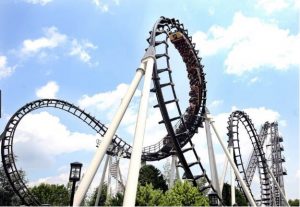 Imagine you’re on this roller coaster and it stops! Well, that almost happened to me last week.

Here’s a story that I want to share with you. It was during chol hamoed (Middle days of Passover) at an amusement park, and we had our whole day planned out. We were on our second to last ride of the day, and everything was going wrong. It was taking such a long time to get on the ride. We had to get back home before yuntif (Passover) started, so we quickly ran to our last planned ride, not knowing if we had time to actually get on it because of the delay.

When we got there, we saw that the ride was closed. The worker told us that the ride stopped in the middle and the people on it were stuck. I suddenly realized that our dramatic delay on the ride before really helped us with the ride afterwards. If we didn’t have the delay then we would have been the people that got stuck on the ride and we wouldn’t have made it home in time for yuntif.

In life we have seemly good times and seemly bad times, kind of like a roller coaster. Sometimes what we think is bad, we later realize is for the good. Part of growth is trying to better understand how the seemly bad part in our life is for the good.

Moving forward to Shavuos, I want to learn more about this topic and try to understand a glimpse of Hashem’s ways in the world. I will do this by continuing to learn the book, “Why Bad Things Happen To Good People” by: Rabbi Shaul Rosenblatt.

10th day of the Omer